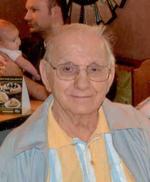 The family will receive friends in celebration of Sam's life at the Humenik Funeral Chapel, 14200 Snow Road, Brook Park on Friday February 21st from 2-4 and 6-8PM. A Funeral Mass will be celebrated at 10AM on Saturday at Mary Queen of the Apostles Church, 6455 Engle Road, Brook Park. Everyone please meet at church. Interment at a later date.