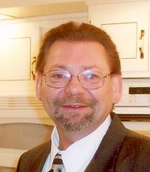 Hanobik, Joseph Frank, age 48 of Medina, passed away suddenly on November 11, 2010. He is survived by his parents Frank and Barbara (nee Chaky). He is preceded in death by Margaret, his beloved wife of 15 years. Dear brother of Michael, Barbara Horvath, and Frank Jr. Uncle to many nieces and nephews. Veteran US Army.

The family will receive friends in celebration of Joseph's life at the Humenik Funeral Chapel, 14200 Snow Road, Brook Park, OH, on Tuesday November 16, 2010 from 2-4 and 6-8PM, where Funeral Services will be held on Wednesday at 10AM. Interment at Ohio Western Reserve National Cemetery.