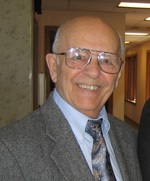 McClaren John returned to the Lord Sunday, April 7, 2013 after courageously trying to recover from a series of strokes he suffered in January. John was born August 5, 1924 in Cleveland Ohio to the late William and Pearl McClaren. Beloved husband of the late Eileen McClaren for 55 years; loving father of Colleen Janca and Dan (Dawn) McClaren; Grandfather of Chris Janca (Janet Weitzel), Jillian McClaren, and Connor McClaren; brother of Eileen Myland; and the late Mary Martin and Donald McClaren, uncle of numerous nieces and nephews. John left John Marshall High School at the age of 17 to join the army and serve his country during World War II as an infantryman. He served throughout the European theatre including landing in Normandy on D plus 4 and spent a winter in the Hurtgen Forest living in a foxhole during the Battle of the Bulge. John was awarded two bronze stars and a silver star for his bravery and commitment. He finished high school upon returning to the states and got married and raised a family. John spent most of his career in the graphic arts industry and became an avid bicyclist at the age of 65 upon retiring. John enjoyed nothing more than time spent with his family. Everyone enjoyed talking with John as he had the proverbial (Irish) gift of gab. John will truly be missed by those fortunate enough to have known him and by his loving family. Interment was private. The family will receive friends in celebration of John's life at the Humenik Funeral Chapel 14200 Snow Rd. Brook Park where a Memorial Service will be held at 10AM on Saturday April 13, 2013. For those who wish, the family suggests contributions to the charities of your choice.