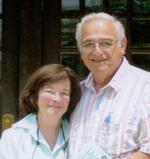 The family will receive friends in celebration of Edward's and Irene's lives at the HUMENIK FUNERAL CHAPEL, 14200 Snow Rd. Brook Park, on Wednesday December 5th, from 2-4 and 6-8PM. Funeral Services will be held at 10AM on Thursday at All Saints Episcopal Church, 8911 Ridgewood Dr., Parma. Joint interment at Ohio Western Reserve National Cemetery. For those who wish, the family suggests contributions to Cleveland Metroparks Zoological Society, at www.clemetzoo.com.