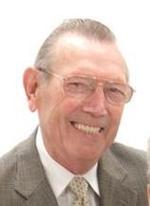 The family will receive friends in celebration of Donald's life at HUMENIK FUNERAL CHAPEL, 14200 Snow Rd. Brook Park on Monday August 20th from 2-4 and 7-9PM, where Funeral Services will be held at 11AM on Tuesday. Interment at Ohio Western Reserve National Cemetery. For those who wish the family suggests that contributions be made to St. Jude Children's Research Hospital 501 St. Jude Place Memphis, TN 38105-1942